A History of Mental Illness

In light of recent events, both in my personal life and on an international level, I think it's time we thought about this issue again.

My problem is, the way people, and media, just throw around the term 'mental illness.

If you think that's ok, then just replace mental with the word 'physical' and you'll see how ridiculous it is.

The term 'mental illness' cannot continue to be used as a cover all for every single type of mental illness out there. And it certainly cannot be used to 'explain' away people's behaviour, so that everyone just nods their head and thinks 'oh, they have a mental illness, well that explains it then.'

Just like physical health includes everything from headaches, to cancer, to the flu and hepatitis or polio, malaria or a simple cold, the term mental health covers everything from mild depression and substance abuse, to aspergers syndrome, ADHD, dementia and schizophrenia, with just as many variables in between.


This brilliant image popped up on my facebook timeline today. 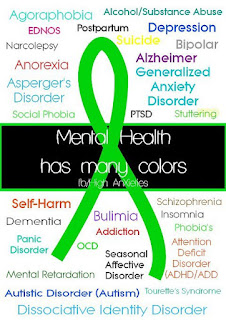 What I want to know, is when the media will start actually taking notice of this, and start differentiating between them. For instance, "..a man with a history of mental illness, has been accused of assaulting a care giver...' would seem a lot less insidious, if the public were aware that this man had a history of Dissociative Identity Disorder, and had stopped taking the medications which were helping him, because a close family member had criticised him for being on 'crazy pills'.

By the same reasoning, the headline '... a mother with a history of mental illness is in custody after being charged with neglecting her child...' would make the general public more aware of the seriousness of the situation, if they were allowed to know that she was in fact, suffering from suffer Post Partum Depression, yet had been too ashamed to ask for help for fear of being labeled 'crazy' by those around her.

But I guess that neither of those truths makes for a very exciting news story.

I'm not saying that there aren't some very mentally disturbed people out there who are legitimately dangerous, there most definitely are. But by simplifying it as simply 'mental illness', the majority of us who suffer a mental illness which is doing no one any harm but us, continue to feel as though we must live in hiding, not reveal our full selves, not ask for help, not take the medication that could save us.

By continuing to lump every mental illness under one umbrella, the media is simply exacerbating the stigma that all people who suffer ANY type of mental illness still have to deal with on a day to day basis.

I take daily medication to keep my depression away and my anxiety at a manageable level. I am a pretty normal person. I love to sing, I am a school teacher, I hate early mornings, I have a family and  kid on the way. But I know that if I were to end up on the news for any reason, I too, would be labeled as having a history of mental illness.

But there is so much more to me than that.

“I pledge my commitment to the Blog for Mental Health 2014 Project. I will blog about mental health topics not only for myself, but for others. By displaying this badge, I show my pride, dedication, and acceptance for mental health. I use this to promote mental health education in the struggle to erase stigma.”